skip to main | skip to sidebar

A. R.'s Interview with Ty Schwamberger 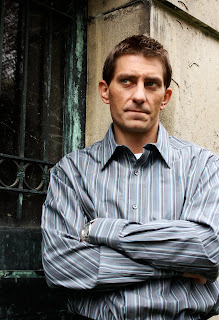 I'm kicking off my interview series with horror and bizarro authors with a fellow horror author. Bloodlusters, meet Ty Schwamberger. He's had several short stories published online and in paper, and his first novel came out in 2008. One of his short stories, "Cake Batter," was optioned for a short movie and came out in 2010. A part-time faculty member at the University of Akron, he pens the monthly column, "Ty-ing Up the Genre" for Hellnotes.com and the quarterly column, "Guidance from the Dark Scribe," for Morpheus Tales magazine. Several anthologies and a novella are soon to come.

A.R.: Hi Ty. Thanks for being my guest. I know you write horror, but tell us a little about what kind of stories you pen, what you like to write about the most and where your short stories have been published. Congratulations on "Liquid Courage" in Shroud 9, by the way.

T.S.: Thank you for having me.

When someone asks me what sort of stuff I write; I normally respond with 'horror'. Although in reality I'd say half of my stories are suspense and the other half what I would consider straight-up horror. I enjoy writing about anything from a crazied person, the human psyche, creatures, new twists on classic monsters, and even adding in some scifi in one of my most recent penned short stories (this was more an experiment more than anything - though I think the story came out ok).

As far as my short stories prior to 'Liquid Courage' in Shroud Magazine #9; I was published on some ezines (which in my opinion shouldn't be overlooked by an beginning writer) and in some independent print mags. I do have a few flash stories coming out in anthologies at the end of this year, as well.

All other short stories (as of right now) will be published in forthcoming short story collections. 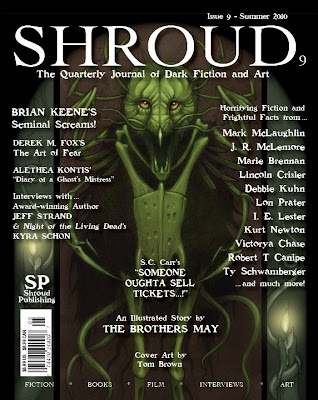 A.R.: I hear you have seven books coming out in the next year and a half. Tell us a little about that, what your first book is about and where you're going as far as content.

T.S.: I do have one novel that came out in 2008 - which is now out of print. You are correct; I do have seven books coming out in the next year and a half (as of this interview I have actually agreed in principle to an eighth book, but can't announce it until I've signed on the dotted line). The books which I've already signed contracts on are as follows: Fem Fangs (anthology - co-editor, end of this month), For After Midnight (short story collection, 4th Q 2010), Dark Things II (anthology - editor - 1st Q 2011), Twisted Tales from the Torchlight Inn (3-novella collection by Myself, Dean Harrison and Thomas A. Erb - February 2011), Relics & Remains (anthology - editor - March 2011), On Dark, Lonely Nights (short story collection, 1st Q 2012), Dinin' (novella - 1st Q 2012).

You can actually read more about each forthcoming book via various links on my website at: http://tyschwamberger.com

T.S.: My favorite author is, Richard Laymon. I have all but 1 of his books (excluding chapbooks and magazines) and absolutely love his writing style. In fact, I've had more than a few people tell me that my writing style is similiar to his. This definitely isn't by design and I can only hope to ever be as half as good as he was. There are several other current authors that I absolutely love to read, as well, but I think that is better left unsaid.

As far as Laymon; I've always enjoyed how he can take such a common situation and turn it into something off-the-wall or macabre. His style is simple, yet effective, and can scare the ever-living hell out of you. It's perfect!

A.R.: Great answer! I love Laymon. What are your favorite horror movies, and what do you think about the state of the horror flick today?

T.S.: I grew up watching the slasher films (Friday the 13th, Halloween, Texas Chainsaw Massacre, etc) of the 80s. My favorite is definitely the original Friday the 13th movies. Though I don't particularly like the remakes of some of the 80s films, I think the horror movie industry (including some kick ass B-movies) is really pumping out some great stuff, today. I try to watch as many as I can get my grubby little hands on.

A.R.: What are your thoughts on Print on Demand and e-books taking over? I heard Dorchester Publishing has gone all e-books, which includes their Leisure Horror imprint.

T.S.: Listen. I remember two and a half years ago when I started writing (yes, believe it or not, I've only been doing this that short of time - if you couldn't tell from the number of books I have coming out over a relatively short period of time - I like to go balls-out when it's something I love to do); POD was taboo as all get-out. But, now...oh, now...the majority of small presses do it, along with some major publishers. From a business standpoint; how can someone say that isn't the way to go? Hell. You don't have to print thousands of books that you aren't even sure are going to sell and can instead just print them as they are ordered. This DOESN'T in any way diminish the quality of the fiction contained inside the covers (for the 'quality' presses, of course), but helps control overhead and therefore help these great companies not go by the wayside just because the economy of this country is in the dumps.

As far as e-books...some of my future stuff will be coming out in e-book form (though, every title WILL be in print, as well). I can't say I'm absolutely sold on the idea of reading an e-book, since I do write and read my stuff and others that I'm editing for on a 'screen' already, but I will say that tons of people are jumping on the idea of ereaders and such and can help the beginning writer (just as ezines) get in front of a large audience to showcase their stuff.

A.R.: Do you write full-time or do you have a full-time job? What education did you acquire for this work?

T.S.: I graduated from college in 2000 with a BA in History of all things. My degree basically means I can't, unless I would have gone onto graduate school, find a job in my major. For the past 8 years, I've worked for a few companies doing accounting-type work. I actually got asked recently in another interview; how in the world do I still have to work a 'day job' (as I call it) with all the stuff I have coming out. My answer is always; it's not as easy as some people think to be able to make enough writing to do it full-time. Writing full-time is my ultimate goal, and if things keep going as they are now, I hope to be able to do so in the next 5 years. That's if the stress of working full-time and keeping up my current output of material doesn't give me a brain hemorage first...

A.R.: Did you go the agent route, sign with a publisher or self-publish?

T.S.: I've never gone the self-publishing route. Although, if you have a dedicated following like Brain Keene, for example, I think it can work for you. Maybe one day...I don't know.

At this point, and I can say with some authority for the future, I will never sign with an agent. I do think that agents can be beneficial, but I actually enjoy the business side of writing just as much as the putting the words on the page part. All of the stuff I already have out there, and more specifically the future material, I have signed exclusively with a variety of publishers on my own accord.

A.R.: Are you a crafter (must get paid for your stories) or are you an artist (does it for the love of horror)?

T.S.: I consider myself a storyteller. I guess this would technically fall under the 'artist' category. And although I currently do a few things that are unpaid (which I'm not going to tell), I'm at a point now where I need to get paid for the work I do. Bascially, I'm just too damn busy for anything new going forward for which I'm not eventually going to see some sort of monetary compensation coming in.

A.R.: Clive Barker said "Horror is just a sticky-label," that writing a great story is what's most important. Your thoughts on this?

T.S.: How can anyone argue with a master of horror such as Clive Barker, ya know? I definitely can't. I think if you consider yourself a horror writer, which I do, you'll end up bringing in some sort of horrific material into some part of the story - whether it was your intention when you started the thing or not.

A.R.: Will you ever podcast your stories or write a graphic novel?

T.S.: Podcast - At this point, no. Perhaps in the future if the right situation comes along.

Graphic Novel - I would love to jump into this arena and have tried a few times. Graphic novels are really freakin' hot right now and I think it would be great fun to adapt something I've already written into pictures and dialog bubbles or create something new to format the story strictly for the use as a graphic novel.

Thank you, Ty, for your hard work at furthering the horror genre! I wish you much success! 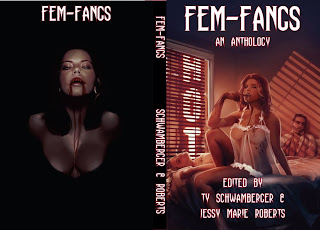